Posted on January 16, 2013 by tuncalik
All the C# code examples presented on this page can be found in the related demo function of MS Visual Studio project FinaquantProtosStarter which can be downloaded at the product page of the free .NET library finaquant® protos.
Sometimes, you want to execute the same set of table operations (table function) on every subtable of an input table; this is a quite common calculation pattern in many applications in business and science.

Subtable transformation1 is a simple way of applying the same table function on every homogenous subtable of an input table.

Following scenarios may give an idea about the use of subtable transformation:

Expected average temperature in May

You have a table including historical average temperatures of many locations, and you want to calculate the expected temperature for each location. Then you need a subtable transformer like the table function TransformSubTables in the uncommercial .net library finaquant® protos.

Integration with other matrix libraries

If all the subtable fields (input and output) are numeric fields, subtables can also be fed to a matrix function instead of a table function (see submatrix transformer TransformSubMatrices() in the 3rd example below).

This transformation structure opens the door for integrating the table function library finaquant protos® with the libraries for matrix computations like ILNumerics, R and matlab, as the user-defined matrix function written in a .net language can be used just as an envelope for a matrix function written with the methods of another library. Look for upcoming articles at finaquant.com about this integration issue.

Following table with historical monthly average temperatures and population will be used for all of the examples below as the primary input. 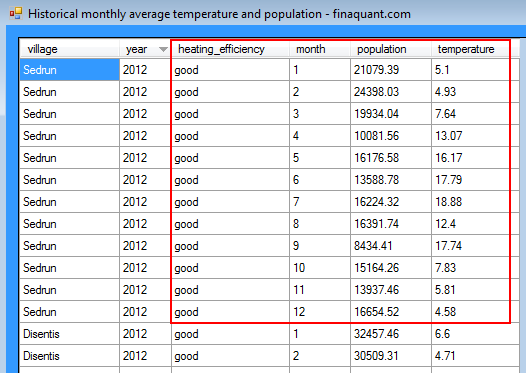 This input table contains average monthly temperatures for the years from 2001 to 2012. The problem at hand is calculating expected energy consumption for each village and year in mega-joules.2 You may download this table as an excel file for a closer check:
InputTable_TransformingSubtables_FinaquantProtos.xls (763 downloads)

The expected energy consumption for each month is given with the following formula:

… where EfficiencyMultiplier is given by the following parameter table for each category of heating efficiency:

Note that four fields are relevant for the calculation of expected energy consumption according to the given formula above: heating_efficiency, month, population and temperature.

These are the subtable input fields defining the frame of subtables that are to be fed to the table function for calculating the expected energy consumption. The first subtable corresponding to the remainder fields Sedrun-2012 is marked with a red-lined rectangle in the picture above showing the primary input table.

Even though the field month is not directly involved in the formula, it is a subtable field nevertheless, because the monthly consumption estimations must be summed up to obtain the yearly consumptions.

Before calculating expected yearly energy consumptions for every subtable, let’s first test the user-defined table function ExpectedEnergyConsumption() as given below with a single subtable corresponding to remainder fields Sedrun-2012.

The rest is obtaining the subtable and feeding it to the table function shown above. 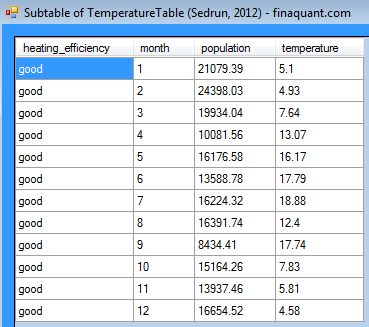 This first example illustrates that the table function for calculating expected energy consumption works alright. We can now apply it on all subtables using the subtable transformer TransformSubTables().

Example 2: Calculate expected energy consumption for each village and year

This example shows the power of subtable transformation. The table function ExpectedEnergyConsumption() tested in the previous example is now applied on every subtable of the primary input table. 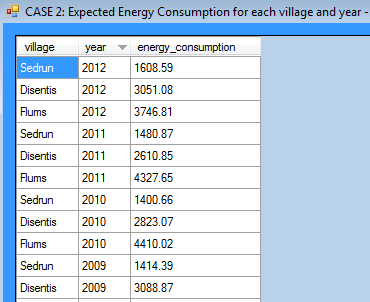 In this example, the string category value heating_efficiency is first replaced by the numeric field efficiency_multiplier so that all relevant fields (i.e. subtable fields) for the calculation of expected energy consumption are numbers. These numeric subtables are then fed to user-defined matrix function ExpectedEnergyConsumptionMatrix() as matrix input through submatrix transformer TransformSubMatrices(). 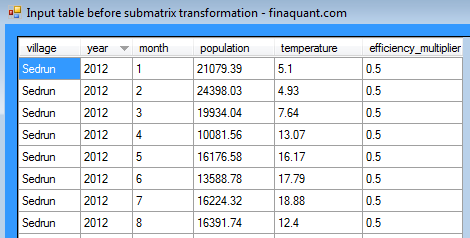 You may compare the result table above with the results of the 2. example.
Written by: Tunç Ali Kütükçüoglu