Posted on January 22, 2013 by tuncalik
All the C# code examples presented on this page can be found in the related demo function of MS Visual Studio project FinaquantProtosStarter which can be downloaded at the product page of the free .NET library finaquant® protos.
As explained in the related article, subtable transformation is a simple way of applying the same table function on every subtable of an input table.

Function Router1 extends this concept further; with the table functions of the .net library finaquant® protos like FunctionRouterA() it is possible to apply selected table functions on selected subtables of an input table, as the examples below will illustrate. 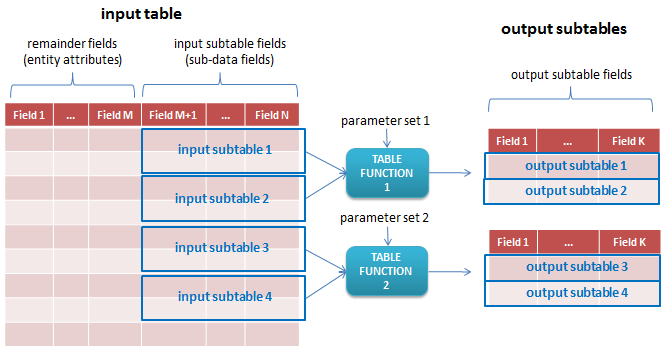 The entity attributes (all the text and numeric attributes of an input table excluding subtable fields) determine which table function is to be applied on which subtable (sub-data of an entity).

Following scenarios may give you an idea about the use of function routers in practice:

Result table of a function router

You may see below the structure of a result table that is produced by a function router:

The resultant (output) subtables are combined with:

The associated table as parameter to a function router can be left empty if you don’t want to add extra fields to the result table.

For example, assume you want to calculate the expected population for some cities in ten years from now. Your input table has following fields:

In order to have the highest transparency about the applied estimation methods, you may want to add an additional field into your result table: estimation_method with possible values small city or large city. You can add this field into the result table by using the parameter associated table.

The result table will then look like as follows:

Anatomy of a table function as Function Router

I will use the same example case here as presented in the previous article subtable transformation with some variations:

Computing expected average energy consumption for household heating next year in May, in several cities based on historical data like population and temperature.

Following test table with historical monthly average temperatures and population will be used for all the examples below as the primary input. 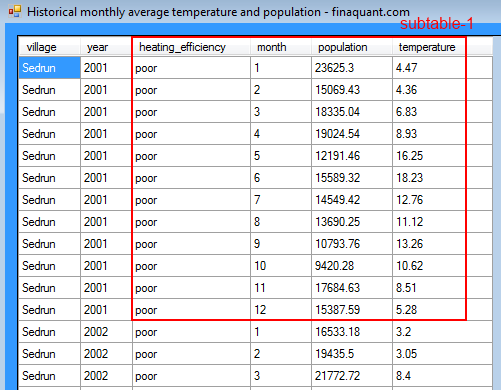 This input table contains average monthly temperatures for the years from 2001 to 2012. The task is calculating expected energy consumption for each village and year in mega-joules2. You may download this input table as an excel file for a closer check:
InputTable_FunctionRouter_FinaquantProtos.xls (907 downloads)

Example 1: Apply the same user-defined table function on all subtables

As we are interested in yearly energy consumption estimates, per month estimations are summed up in the user-defined function to obtain the yearly estimate.

Now apply the user-defined table function above on all subtables of the primary input table. Note that all the example C# code presented here including the user-defined functions (and more) can be found in the Visual Studio project FinaquantProtosStarter (in releases 1.02 and higher). 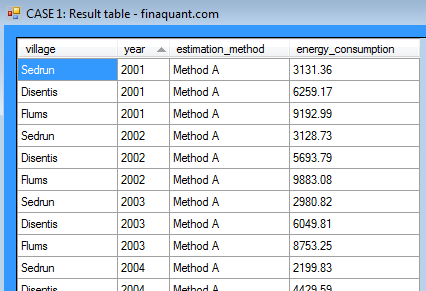 As you may see in the cross-section of the result table above, the same estimation function A is applied on all village-year pairs.

In this example, there are two estimation methods, A and B. Accordingly, there are two slightly different user-defined table functions to be applied on different subtables. Two parameters of the function router determine, which method is applied on which subtables: Condition table (CondTbl) and function array (MyTableFuncList). 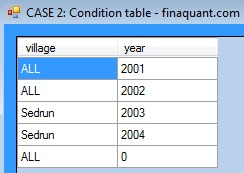 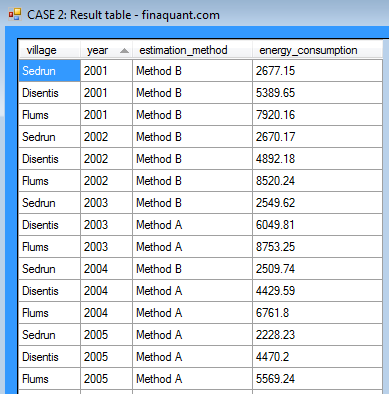 As you may see in the result table above, the old estimation method B was applied all other villages until 2002; only for Sedrun until 2004.

Example 3: Apply both estimation methods on all village-year pairs

In this example, the user wants to see the estimation results for both methods A and B, for all village-year pairs (entity attributes) by setting the critical parameter FirstMatchOnly to false. FirstMatchOnly = false means, a subtable of input table can be matched with multiple rows of a condition table.

This example also illustrates, how a function router can be used for scenario analysis. You ask a “what happens if” question, and want to see the outcomes for all possible discrete cases. Each case may require a different logic, and a different function with its own set of additional parameters to compute the expected outcomes. 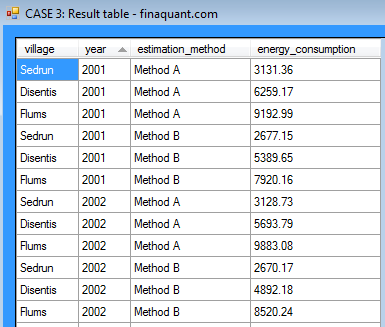 As seen in the result table above, both estimation methods A and B are applied on all subtables of village-year pairs. 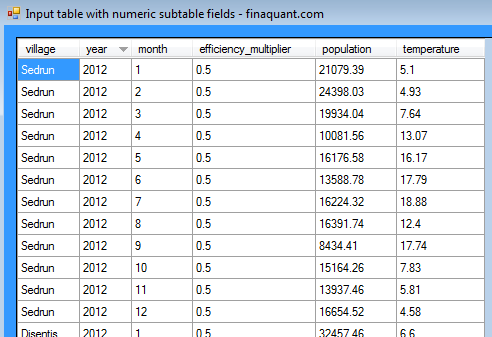 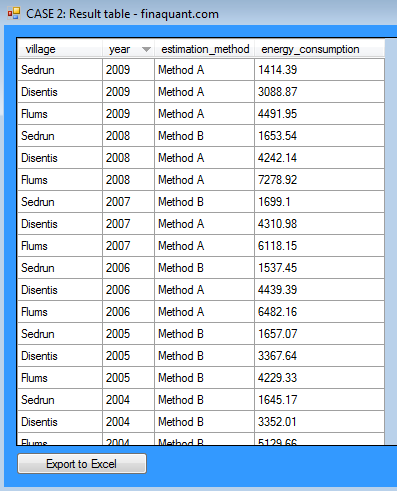 As seen in the result table above, the estimation method B is applied for the village Sedrun until 2008, whereas this method is applied for all other villages until 2005.

Example 5: Function Router working like a rules engine for validations

In this example, the data (i.e. subtables) in the primary input table are not used to compute estimated energy consumptions; they are just used to calculate the lower and upper limits for estimations.

The estimations come from an external source, and the function router is used to validate these numbers by checking the lower and/or higher limit conditions.

Two user-defined table functions are used for validation of estimated energy consumptions per village and year:

Note that you could have as many validation functions as you wish; not just two as demonstrated in this example.

As seen in the result table above, both validation methods (Lower and Higher Limits) are applied on the village Sedrun, as it was configures by the condition table.
Written by: Tunç Ali Kütükçüoglu