Allocation and Distribution with finaquant® protos

Posted on November 22, 2012 by tuncalik
All the source code in C# required for running the examples below including the simple distribution function can be downloaded at the product page of finaquant® protos. See application examples on the product page. 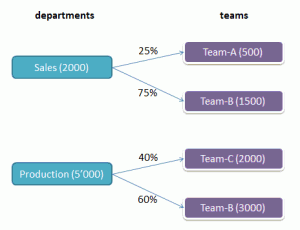 Though most commonly used for financial planning and accounting, allocations and distributions can be needed in any calculation where proportionate (pro-rata) distribution of some amounts is required. 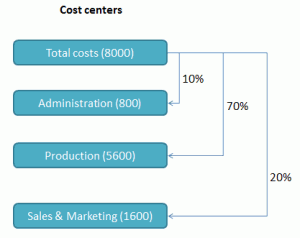 In the examples below, you will see how a distribution can be accomplished in four simple steps using the available table functions in finaquant® protos. These four steps will be than packed into a general distribution function with tables as input and output parameters as shown below:

The simple distribution function (which is a table function) has two input tables, and an output table, plus some additional detail parameters like the names of new key figures to be added:

Note that an allocation can be formulated as a special case of distribution, as you will see in the following examples.

In this example, costs are distributed from department to teams and persons. Following cost and key tables are given as inputs:

SourceTable from which the amounts are distributed: 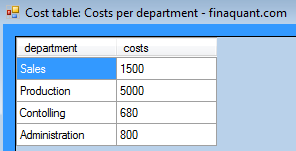 KeyTable with distribution keys (or ratios):

The strategy for calculating the distributed costs is the following:

This is a simple and effective strategy which can be used for many other kinds of table calculations. First, make sure that you have all the required parameters as fields of the table, than calculate the desired fields by row-by-row processing of the table.

We have now two key figures costs and cost_key in the combined table as shown above. The aggregation key figure key_sum (sum of cost_key w.r.t. department, the common attribute of cost and key tables) is still missing. We need key_sum to calculate distributed costs: 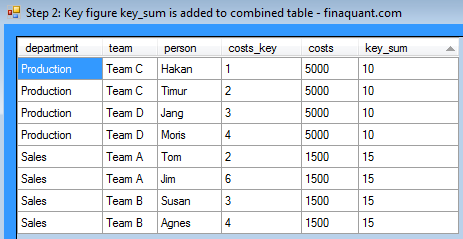 This key figure must be inserted into the table so that it can be calculated by row-by-row processing of table with the formula stated above.

The initial value of the new key figure costs_distributed is zero for all rows of the combined table. The resultant values for this key figure will be calculated with the next and last step.

All the four steps for calculating the distributed amounts can be packed into a single general distribution function with the following input and output parameters:
OutputTable =
SimpleDistribution(SourceTable, KeyTable, TargetKeyFig, KeySumKeyFig)

Following conditions must be satisfied for input parameters of the distribution function:

Let’s test this function with the same input tables (cost and cost key) introduced in the first example above (distribution in 4 steps):

So we obtained the same distribution results. That is, the four distribution steps explained in the previous example are successfully packed into a function with generalized input and output parameters. Now you can execute the distribution function on any pair of input tables (source and key) provided that all the parameter conditions listed above are satisfied.

In this example scenario, a company with headquarters in Paraguay has sales and production departments in countries Bolivia and Peru. The bonus amounts as performance incentives for employees are first calculated per department and country. These bonus amounts are then distributed to teams and years. Bonus amounts are distributed also to years, because the bonus payments will be done at the end of 2013 and 2014.

KeyTable: Key amounts for the distribution 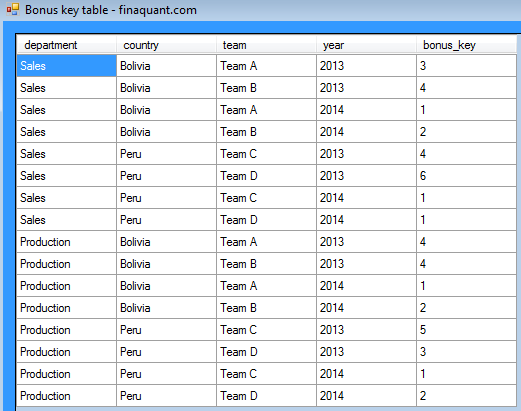 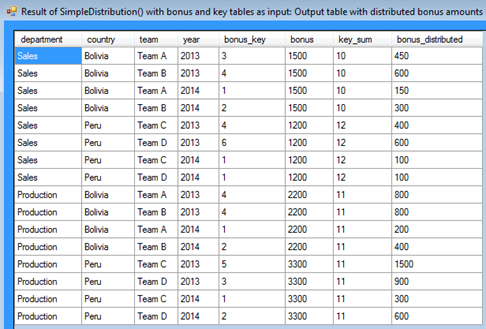 Note that the sum of key amounts (key_sum) are obtained by aggregating bonus_key with respect to the attribute pair department and country that are common attributes of input tables.

This example will illustrate that allocations can be formulated as a special case of distribution.

In this example scenario, the profits accumulated at a main hub are distributed to other cost centers according to the given distribution keys.

KeyTable: Key amounts for the allocation of profits to other cost centers

Just by separating the attribute profitcenter into two (source and target) we have transformed the allocation into a distribution problem. We can now apply the distribution function on these source and key tables:

Simple proportionate (pro-rata) distribution can be accomplished by simple table functions in four steps. All these steps can be packed into a general distribution function with two input tables representing the source (initial values to be distributed) and key (distribution ratios) amounts.

Once you have your distribution function, you can forget about the details of the function (four steps etc.) and simply apply this function on any input table pairs specifying the source and key amounts, provided that:

Nevertheless, if you have sufficient analytical skills, you can calculate almost any kind of distribution with the table functions of finaquant® protos. The key functions will be table combinations, aggregations and transformations (especially row-by-row processing).

Allocations can be formulated as a distribution problem, as the last example above illustrates (profit allocation).